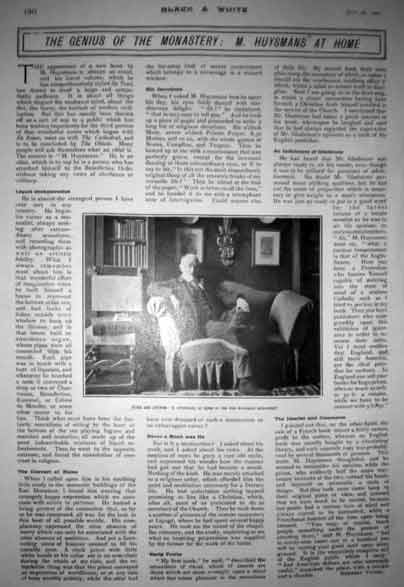 THE GENIUS OF THE MONASTERY : M. HUYSMANS AT HOME


The appearance of a new book by M. Huysmans is always an event and his latest volume, which he has comprehensively styled De Tout, has drawn to itself a large and sympathetic audience. It is about all things which disgust the medieval mind, about the dirt, the hurry, the hubbub of modern civilisation. But this has merely been thrown off as a sort of sop to a public which has been waiting impatiently for the third portion of that wonderful series which began with En Route, went on with The Cathedral, and is to be concluded by The Oblate. Many people will ask themselves what an oblat is. The answer is "M. Huysmans." He is an oblat, which is to say he is a person who has attached himself to the Benedictine Order without taking any vows of obedience or celibacy.

He is almost the strangest person I have ever met in any country. He began his career as a sensualist, always seeking after extraordinary sensations, and recording them with photographic as well as artistic fidelity. What I always remember most about him is that wonderful effort of imagination when he built himself a house to represent the bottom of the sea, and had tanks of fishes outside every window to keep up the illusion, and in that house built an enormous organ, whose pipes were all connected with his mouth. Each pipe was in touch with a butt of liqueurs, and whenever he touched a note it conveyed a drop or two of Chartreuse, Benedictine, Kummel, or Crême de Menthe, or some other nectar to his lips. Think what must have been the fantastic sensations of sitting by the hour at the bottom of the sea playing fugues and marches and oratorios, all made up of the most indescribable mixtures of liquid refreshments. Then he went to the opposite extreme, and found the consolation of contrast in religion.

The Convert at Home

When I called upon him in his soothing little study in the monastic buildings of the Rue Monsieur, I found him wearing that strangely happy expression which we associate with saints in pictures. He looked a living protest of the contention that, so far as he was concerned, all was for the best in this best of all possible worlds. His complacency expressed the utter absence of worry which can only be associated with the utter absence of ambition. And yet a fascinating sense of humour seemed to fill his amiable eyes. A sleek priest with little white bands at his collar sat in an arm-chair during the whole of my visit, and the remarkable thing was that the priest conveyed an impression worldliness, or at any rate of busy worldly activity, while the oblat had the faraway look of serene contentment which belongs to a personnage in a stained window.

When I asked M. Huysmans how he spent his day, his eyes fairly danced with mischievous delight. "Ah!" he exclaimed, "that is very easy to tell you." And he took up a piece of paper and proceeded to write a long list of religious devotions. Six o'clock Mass, seven o'clock Private Prayer, 8.30 Matins, and so on, with the whole gamut of Nones, Compline, and Vespers. Then he looked up at me with a countenance that was perfectly grave, except for the incessant dancing of those extraordinary eyes, as if to say to me, "Is this not the most stupendously original thing of all the eccentric freaks of my versatile life?" Then he added at the foot of the paper, "Work in between all the time," and he handed it to me with a triumphant note of interrogation. Could anyone else have ever dreamed of such a termination to an extravagant career?

Never a Monk was He

But is it a termination? I asked about his work, and I asked about his vows. At the mention of vows he gave a rare old smile, and expressed his wonder how the rumour had got out that he had become a monk. Nothing of the kind. He was merely attached to a religious order, which afforded him the quiet and meditation necessary for a literary life. He had undertaken nothing beyond promising to live like a Christian, which, after all, most of us pretended to do as members of the Church. Then he took down a number of pictures of the remote monastery at Ligugé, where he had spent several happy years. He took me the round of the chapel, the refectory, and the study, explaining to me what an inspiring preparation was supplied by the former for the work of the latter.

"My first book," he said, "described the sensations of ritual, which of course are those which act most strongly upon a mind which has taken pleasure in the sensations of daily life. My second book deals with plain-song, the monotony of which, or rather I should say the continuous soothing effect of which, trains a mind to submit itself to discipline. Now I am going on to the third step, in which a closer connection having been formed, a Christian finds himself enrolled in the service of the Church." I mentioned that Mr. Gladstone had taken a great interest in his work, whereupon he laughed and said that he had always regarded the expression of Mr. Gladstone's opinions as a trick of his English publisher.

An Indictment of Gladstone

He had heard that Mr. Gladstone was always ready to air his vanity, even though it was to be utilised for purposes of advertisement. No doubt Mr. Gladstone possessed many striking qualities, but he had not the sense of proportion which is necessary to give weight to a man's utterances. He was just as ready to put in a good word for the latest volume of a female novelist as he was to air his opinions on ecclesiastical matters. "Ah," M. Huysmans went on, "what a curious temperament is that of the Anglo-Saxon. Here you have a Protestant who fancies himself capable of entering into the state of mind of a zealous Catholic such as I tried to portray in my book. Then you have publishers who seize greedily upon this exhibition of ignorance in order to increase their sales. Yet I must confess that England, and still more America, are the ideal paradise for authors. In England you sell your books for huge prices, often as much as 20fr. or 30fr. a volume, while we have to be content with 3fr 50."

The Idealist and Commerce

I pointed out that, on the other hand, the sale of a French book meant a fairly certain profit to the author, whereas an English book was usually bought by a circulating library, and each separate copy was probably read by several thousands of persons. This made M. Huysmans thoughtful, and he seemed to reconsider his opinion, while the priest, who evidently had the more mercenary instincts of the two, rubbed his hands and deplored so miserable a state of things. But they both soon came back to their original point of view, and insisted that we were much to be envied, because our public had a serious turn of mind and always craved to be instructed, while a Frenchman insisted all the time upon being amused. "You may, of course, teach people something under the pretext of amusing them," said M. Huysmans, "but in ninety-nine cases out of a hundred you will be casting your good seed upon stony ground. It is the exquisitely receptive soil of the English public which I envy." "And American dollars are also extremely useful," remarked the priest, with a twinkle and a chuckle.